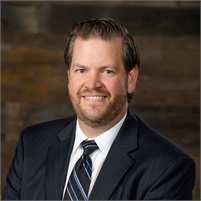 Jerad graduated from Dodge City High School in 2002. From Fort Hays State University and Friends University, respectively, he has undergrads in Criminal Justice and Business Administration . In 2011, Jerad completed a graduate degree in Business Administration from Friends University and is currently working on a second graduate degree in Personal Financial Planning from the College for Financial Planning.

Jerad began his career in the financial industry ten years ago and in 2008 he made the move to becoming a licensed financial advisor. In 2012, after many years of dedicated coursework studies, he passed the national exam and earned the prestigious designation of CFP®.

In the winter months, Jerad spends his free time hunting and reading books and during the summer he enjoys golfing and spending time at Coldwater Lake with his family and friends. Jerad is active with the Dodge City Community College Endowment and Foundation Boards of Directors and can also be found volunteering his time at the Depot Theatre and with CASA, Children Worth Saving, Inc.