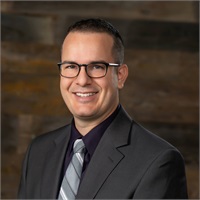 After graduating with a Bachelor’s Degree in Business Administration from Barclay College, Justin married Annalisa (then Carlson) in June of 2009, and they enjoyed their first years of marriage in Haviland, KS. Justin and Annalisa have 5 children: Annika, Emmelyn, William, Linnea, and Lucia.

Justin grew up in various places in Kansas, including Oberlin and Hoxie but spent his High School years in Natoma, KS on his family’s farm. He is the older of two children. His brother Jared is also employed by United Capital Management.

Justin’s family-centered upbringing instilled in him strong ethics of hard work, honesty, and faith. He finds great fulfillment in helping people to reach their goals and potential in their financial life. He assists in retirement planning and estate planning. He helps people to have a greater understanding of the risk and reward relationship in their particular investment strategy. Justin is a skilled and passionate educator in the financial realm. He is dedicated to his family, and believes that cultivating relationships, both with people and with God is the cornerstone to a strong and secure life.