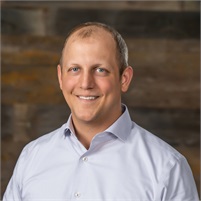 Christopher was born and raised in Alma, Nebraska where he also graduated from High School in 2008. He then moved to Lincoln where he attended and graduated college from University of Nebraska-Lincoln in 2012 with a BS in Business Management and a Minor in Finance.

Christopher began his career as a licensed financial advisor in 2012. In 2014, after dedicated coursework studies, he passed a national exam and received the Accredited Wealth Management Advisor (AWMA*) Certification.

In his free time, Christopher likes to play sports, especially golf and basketball, and hang out with friends on Harlan County Lake. He also likes to spend time with his wife Hannah, who works as a web designer for Skwintz, and family that lives in the area. In February of 2017 they welcomed beautiful twin babies, Fleur & Colossus. They have since welcomed two more kids to the family, Rheir and Ethesia, who were born in July of 2018 and February of 2021, respectively.